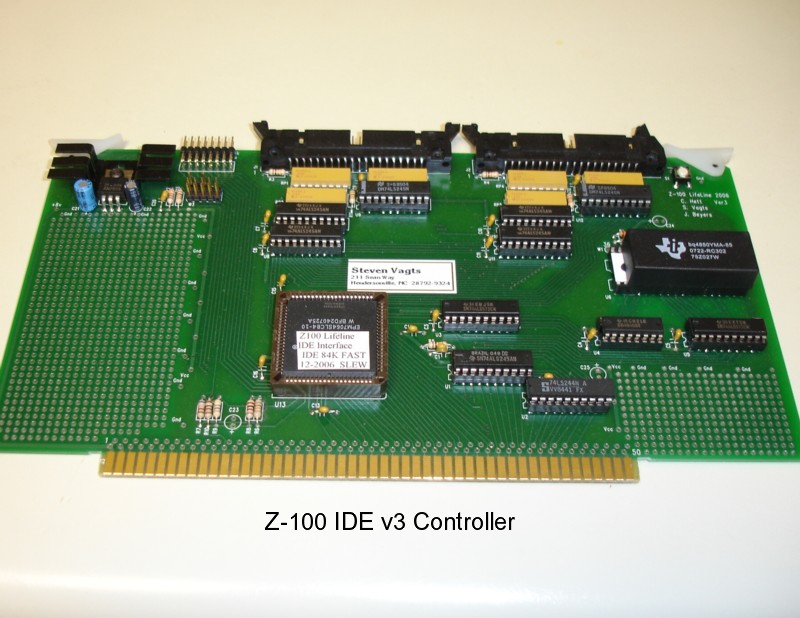 There are four popular IDE devices in use with the Z-100 IDE Controller. These are:

We hope to modify other operating systems to use the IDE drives in the future.

TIP:  Unless you are leaving a large FAT32 partition for use in a PC or clone, it is recommended that you look for devices that are about 1 - 2Gb in size for practical reasons.

CAUTION:  You must have access to an IDE connector in your PC and a Windows Startup Disk. As you are playing with FDISK, to avoid damaging the PC's own hard drive, I recommend disconnecting it from the system to avoid inadvertently reformatting the wrong drive!! It will not be needed and can be reconnected after all this stuff is done.

WARNING:  Changing or deleting partitions will permanently delete any data that was on the partition and it cannot be retrieved! Back up everything that is important to you before you use FDISK.

Finally, after reading all this, if you are uncomfortable doing any or all of this, or if you don't have access to a PC that you care to mess with, don't hesitate to call or e-mail me. I have some spare drives & other devices and can do all this for you, including creating the software for your complete Z-100 system for reasonable prices.

To Partition an IDE Device:

IMPORTANT:  If you enable large disk support, some operating systems will be unable to access the partitions and logical drives that are over 512Mb in size.

Unless to are going to keep a large FAT32 active partition with a Windows Operating System on it, you can press {N} and {ENTER}. If you press {Y}, however, and keep your partitions smaller than 512Mb, you would still be fine.

Pressing {ESC} takes us back to the FDISK Options Menu.

Note:  Remember to leave one Primary Partition, of sufficient size, for your PC if you are planning to use the IDE device as your PC boot device. If you are not, the PC will still recognize all partitions and data on the device any time it is plugged into the PC, so transferring data between the PC and Z-100 is just a matter of plugging the device in. This is considerably easier if you install a Compact Flash device in the PC and Z-100.

Note:  To keep track of drive letters, I recommend giving each partition a name when the partition is formatted, in the order that it was created and will be detected on the Z-100. For example, each of the ST31276 drive's partitions was given the drive's name and a letter to represent it. The first partition was named, ST31276x, where x was A, the second, B, etc. Then when I use ZDIR on a partition, the drive's label is right there to help keep me straight.

Naming your partitions is particularly helpful if you have multiple IDE devices on the Z-100, because the Z-100 detection system has a similar problem to the PC's addressed in the last note. With two or more IDE devices detected, the drives will be listed in the order of:

Until all drive letters up to "Z" are used up.

This was done on purpose, expecting that each device would only have one or two partitions. However, we have since found out that many if not most Z-100 software applications will not recognize partitions greater than 32Mb due to address limitations. This forced us to divide the IDE devices into numerous smaller partitions. Unless you name your partitions on each device, good luck keeping it all straight!

How to Format an IDE Device

After you create the partitions, and you are happy with each of their sizes, you must format each partition. It is recommended that this be done from the Windows Startup Disk. While the Z-100 has PCFORMAT that could be used, it is relatively untested. I've used it a few times to fix partitions where the File Allocation Table was messed up by corrupted write operations during testing of the IDE controller and I had great success. But usually I've been using the Windows Startup Disk utilities because these are handy (having just created the partitions here) and they are well tested. I've also had to use SCANDISK to straighten out FAT problems that my testing on the Z-100 had created.